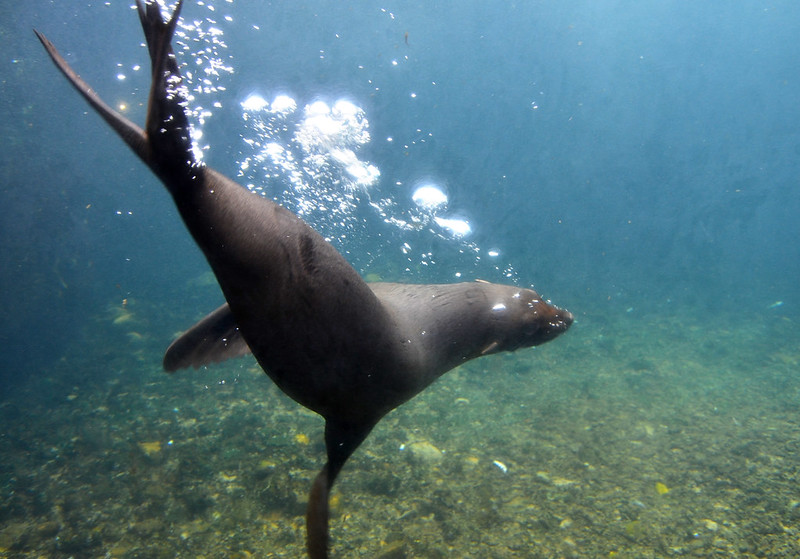 For the first time, plastic microfibers have been discovered in wild animals’ stool, from South American fur seals. The findings were made by a team of Morris Animal Foundation-funded researchers at the University of Georgia, who suggest examining scat from pinnipeds can be an efficient way to monitor environmental levels of microfibers and microplastics in the environment. Their study was published in the Marine Pollution Bulletin.

“It’s no secret that plastic pollution is one of the major threats to marine ecosystems, but we’re learning now just how widespread that problem is,” said Dr. Mauricio Seguel, a research fellow at the University of Georgia. “These samples are invisible to the naked eye. We want to understand factors that are driving their distribution and what this means for animals in the Southern Hemisphere.”

The team examined the scat of 51 female South American fur seals on the remote Guafo Island, in southwestern Chile, from December 2015 to March 2016. Each sample’s inorganic material was dissolved in a solution in a lab, leaving only the microscopic, plastic particles to be analyzed. Researchers then found 67 percent of the samples showed a remarkable abundance of microfibers, which until now had only been reported in animals fed in captivity.

Microplastics are plastic fragments smaller than 5 millimeters. Microfibers are the least studied form of microplastic. They are small hairs of plastic, less than 1 millimeter in size, from materials such as polyester or nylon and can end up in the ocean through waste water after cleaning, no matter how thorough the treatment. They also can absorb a wide array of pollutants.

The researchers believe the microfibers arrived at Guafo Island through changing ocean currents, before being consumed by plankton and continuing up the food chain through fish and, finally, to the seals. There isn’t enough evidence to determine if microfibers have any adverse effects on mammals, but some studies have indicated morphological changes in fish.

Scat analysis, the team noted, could be a good tool to monitor the exposure of marine mammals to plastics as it’s effective and non-invasive, poses no danger to either the researcher or the animal, and it’s easy to identify both fur seals and their feces. Dr. Seguel says his colleagues are conducting similar, follow-up tests in other parts of South America.

“It’s not too late to act to heal our oceans, but one of the first steps is determining how much we have damaged the ecosystem through our activities, like producing and disposing of plastic,” said Dr. Kelly Diehl, Morris Animal Foundation Interim Vice President of Scientific Programs. “Studies like these will help us learn those answers so we can begin to make better decisions for the health of marine life.”

Morris Animal Foundation has funded other fur seal studies at Guafo Island with Dr. Seguel’s team. One found that factors that contributed to a die-off of South American fur seal pups included mites, pneumonia and changing sea surface temperature. In another, researchers discovered hookworms feed at a constant rate on their seal pup hosts before they produce eggs and die, a strategy which also often kills the pups as well.

Materials provided by Morris Animal Foundation. Note: Content may be edited for style and length.